It was dark and I was guided by a series of hurricane lanterns hung at regular intervals on wooden stakes driven into the ground. I found my way to the tent, that I had checked into earlier in the day. But for the light emanating from these lanterns, it was pitch dark. The lights of Chamrajnagar glimmered in the distance. The night was very pleasant, considering that it was the peak of summer. It was a perfect setting to hit bed after a day of extensive travel. I was visiting the K.Gudi Wilderness Camp run by Jungle Lodges & Resorts Ltd. and located in the famous Biligiri Rangaswamy Wildlife Sanctuary.

I was very tired and quickly fell asleep. I had but slept a couple of hours when I was woken up by a curious sound. I lay on my back hoping to hear it once more. There it was again – ‘one more bottle’ … … ‘one more bottle’!. It was indeed the call of the Indian Cuckoo. From this point onwards, I was kept awake for most of the night by the pleasant but incessant calls uttered a few times every minute. In the silence of the night, the call was loud and clear. This, to me, also suggested some sense of well-being. The sweet sounds of the night kept me awake and excited right through. All my tossing and turning with the hope of falling asleep were in vain.

When a wee bit of light trickled through the curtains, I checked the time. It was early in the morning; my watch indicated 5.30 am. It was about this time that the Common Hawk Cuckoo with its ‘… brainfever, brainfever …’ call joined in. I finally decided to get out of bed and get ready for the safari into the forest.

The morning was very still. There was a hint of mist and all else quiet but for these two birds calling. There was enough light to discern the outlines of the trees that surrounded my tent. Just when it was getting brighter, the Jungle Owlet came up with its lengthy raucous call, which increased in tempo as it progressed and ended abruptly, as if it were handing over charge to the diurnal birds until sunset later in the day.

At this point of time the Malabar Whistling Thrush seemed to take over eagerly. Its long string of mellow, fluty whistles that sounded almost human was a treat to the ears. It was such a surreal experience that I will not even venture to describe. All descriptions would fall short and not do justice. It would be best to personally listen to and experience this call. However, I think it is only right to mention that Salim Ali – father of Indian Ornithology has aptly likened the call to a school boy whistling joyously when returning home from school.

When I was enjoying the song of the Malabar Whistling Thrush, the Crow Pheasant pitched in with its booming ‘whoop, whoop, whoop …’ call and soon, several other birds joined in. The Small Green Barbet came up with its guttural ‘kutroo, kutroo, …’ call which it continued for a good part of the morning. The little Tailor Bird added the ‘tuwee, tuwee, tuwee, …’ call for a short while.

Then the Spotted Babbler burst into its morning song that consisted of a long series of short whistles before it trailed away. It later settled down to its usual monotonous ‘I beat you’ call. The shy and secretive Slatyheaded Scimitar Babbler decided to make its presence felt as well. The hollow sounding ‘hut huhuhu’ call of the male repeated three or four times was very characteristic.

Albeit a little late, the Grey Junglefowl, ushered in dawn with the ‘kru kooo kurru kuk kuk’ call and went silent after calling a couple of times. The male Koel added its loud ‘kuoo’ repeated several times. From a nearby tree, a Quaker Babbler gave out its melodious ‘daadee give me toffy’ joining the seemingly ever-growing list of birds announcing daybreak.

I got ready and came out of the tent only to be treated by a Magpie Robin sitting pretty on the wooden stake outside my tent and uttering the shrill ‘sweee, sweee, …’ call. The mist slowly lifted and the Magpie Robin flew away too! 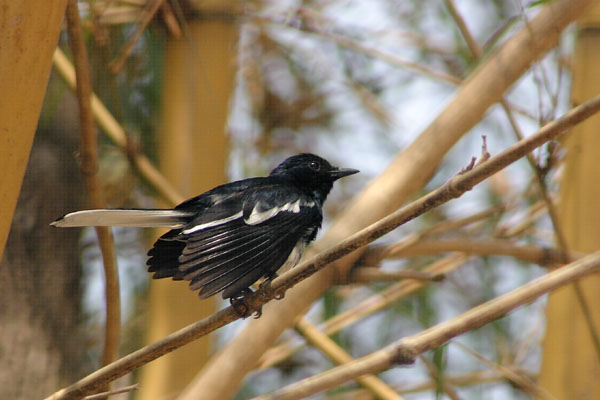 All the birds were out there announcing their presence and location to members of their own kind and perhaps to others too. It seemed as if they were playing their little part in the orchestra played without a conductor. Nevertheless, what an orchestra it was! It was perfect – a symphony that I will never forget for a long time to come. 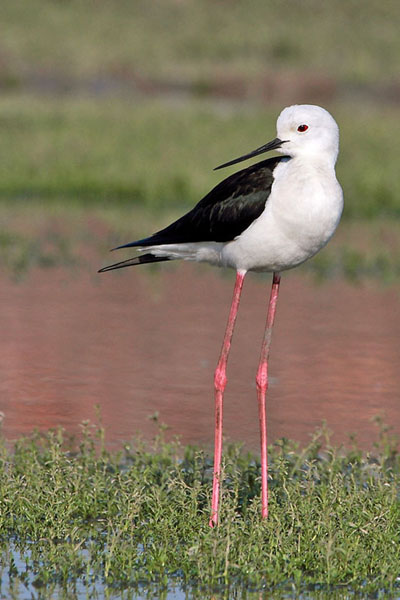